Recently my elderly parents came to visit me in Woking, and they decided to come on the train for the first time rather than driving the 85 miles. Due to mobility issues, they arranged for Assisted Travel from South Western Railway (SWR). My mother now uses a light rolling walking frame as an aid and requires step-free access. I went with them on the first part of their return trip. I was interested to see how Assisted Travel worked, and whether it delivered on its promise. The round trip was mostly a success. This article describes our experiences in detail.

South Western Railway (SWR) state that Assisted Travel has to be booked at least 24 hours in advance – a common requirement with many train companies in the UK. It’s not possible to just show up at a station unannounced – something that I believe was possible from some stations when the franchise was previously run by South West Trains (SWT).

According to the Assisted Travel page on the SWR website, assistance can be booked by phone (a freephone number), textphone or online through a form on the web page.

A few days prior to the planned trip, my parents rung the freephone number to book their assistance and they advised SWR which trains they would be travelling on.

The first journey – Bournemouth to Woking

As it was my parents’ first trip by train for some years I decided to accompany them to help out if required.

As requested by SWR we arrived at Bournemouth station in plenty of time – 30 minutes before the train was due to leave. The access to the platform there is level, which made things easier.

When we approached the staff at the ticket barrier we were delighted to find out that my parents were expected and that staff knew my parents’ names.

A member of staff told us where to stand on the platform. He assured us he’d meet us on the platform with the ramp at the appropriate time. He then kindly suggested we wait in the cafe until a few minutes before the train was due to arrive. Sure enough, as the train pulled in, he came over to us and set up the ramp so my mother could board the train using her rollator. (A rollator is a light tubular metal frame with handles and wheels. It’s a walking aid and has a brake to stop it rolling faster than desired when being used.)

Verdict: So far, so good.

The service from Bournemouth to Woking is direct, and the faster trains are usually worked by class 444 units. These have 5 coaches, and they are usually orientated so the first class seats are in the first coach when the trains are heading towards London (and Woking). In the carriage next to the one with first class seats, there is a disabled toilet and some seats that are assigned as disabled priority seats. There is space provided for wheelchairs here, and my mother left her rollator here.

It’s not possible to book seats on any of the SWR services, but fortunately 2 seats by the wheelchair bays were empty. As we’ll see on the return trip, it can be awkward when the train gets full and able people are sitting in the priority seats.

We did not identify ourselves to the guard as needing special assistance – as we didn’t know we needed to.

As the train arrived at Woking we saw one of the station staff with a ramp on the platform – but right at the other end of the train. I waved at him and he came up the platform as quickly as possible. It seems that he had been told we were at the back of the train, when actually we were near the front.

Also, at this point the train guard apologised as he told us he’d not been informed that Assisted Travel passengers were on the train. Despite this, my mother got off the train ok after a short delay, although she did find going down the ramp with a rollator a little steep and awkward. 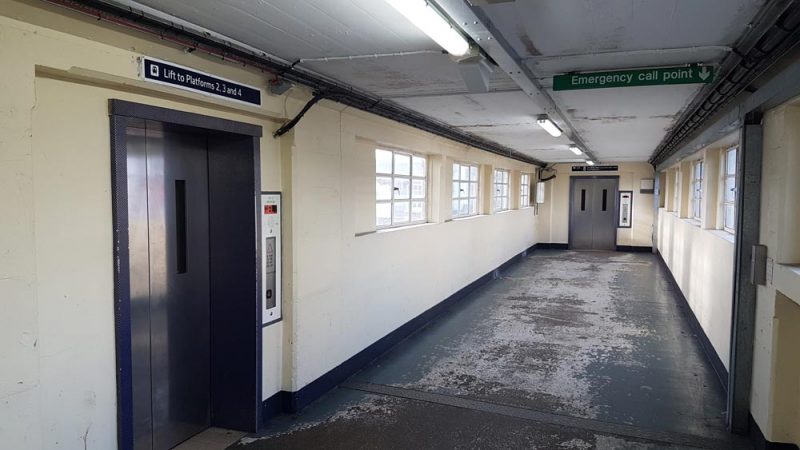 The alternate bridge at Woking station – used by those with mobility needs, and with buggies.

At Woking there are lifts to all platforms, so leaving the station was a level experience. I already knew where the lifts were, but I’m fairly confident that the platform staff would have directed my parents where to go if I hadn’t been there – including which exit to head for since Woking has exits on both sides of the line.

Verdict: Some gaps in the communication here resulted in a bit of confusion about and probably slightly delayed the train’s departure.

The return journey – Woking to Bournemouth

The following day, my parents made the return trip. I didn’t accompany them on this journey, although I was there to see them off at Woking.

Once again we arrived early. It’s not clear if the staff were actually expecting my parents, but this was not a problem, and they directed my parents to the correct platform once they knew which train they were catching. Whilst we were still at the barrier, they radioed to other staff to expect them on the correct platform.

Once on the correct platform my parents wanted to search out the platform staff to announce their arrival. This might have been an issue if I hadn’t been there, as there were no signs indicating where the platform staff office was, and it was my parents’ first time on Woking station. As I’m familiar with Woking station it wasn’t an issue for us. Wayfinding with better signage could improve the ease and experience at this point.

We met Michael who has been working at Woking for some years. He told us where to stand on the platform and that he would be getting the ramp set up for my parents. He was most helpful.

But all Michael’s preparations came adrift when the train arrived and the 444 unit turned out to be the ‘wrong way round’ so the wheelchair area was a few carriage lengths away from where we were standing. Although my mother’s rollator helps her to get around, she’s not the fastest mover, and the trek down the platform took a little while. 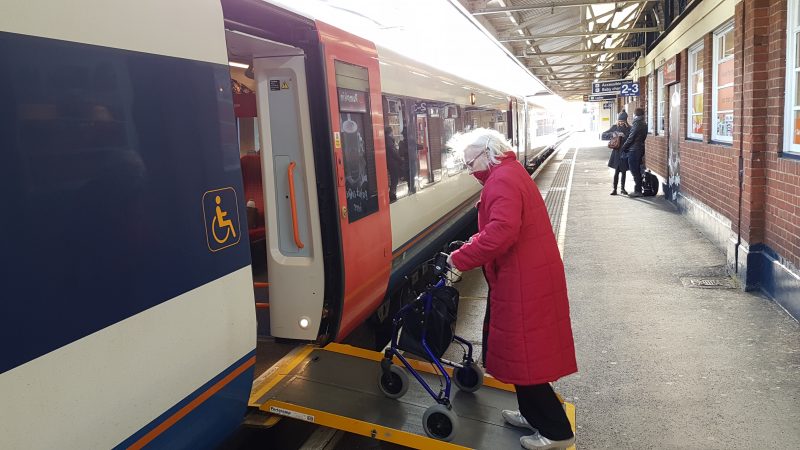 My mother boarding a train at Woking station using her rollator.

The train itself was 5 coaches and was extremely busy. Perhaps as one of the stops was at Southampton Airport, many passengers had suitcases and other luggage – some of it piled up in the wheelchair areas.

When my parents boarded the train, all the ‘disabled priority’ seats were already occupied. 2 people in those seats quickly gave up their seats to my parents. Although this is appropriate and needed to assure the safety and comfort for people with visible or invisible disabilities to travel, I know it is not always the case. Their standing for a portion of their journey to allow my parents to have the priority seats was still appreciated.

The guard on the train had my parents’ details already, before the Woking station staff approached him.

Verdict: Good. It may have been more difficult if more travellers with disabilities were on the same train requiring my parents to ask passengers in non-priority seats to give up their seats. However many travellers in the UK seem to be sensitive to the needs of older or visibly less able travellers. For invisible disabilities like balance issues, anxiety or chronic fatigue this can be much harder.

When the train arrived at Bournemouth, station staff identified themselves to my parents. My parents were told that the ramp was already being used elsewhere on the train. So the guard and one of the station staff carefully helped my mother from the train down the steps onto the platform.

My parents were able to leave the station via a level exit on the ‘down’ side so they didn’t need to cross to the other platform. There is a subway at Bournemouth with ramps so if they had needed to change platforms this wouldn’t have been too difficult.

Verdict: Good care. If my mother had specifically needed the ramp to alight from the train, this could have been provided, but it may have delayed the train as it was already in use.

Overview – what SWR did well

Overview – what could have been better

My parents were very pleased with the service they received from the SWR staff, and they have apparently subsequently written to SWR to thank them. The slight hiccups did not detract from the overall success of their return trip.

More importantly for SWR – and other railway companies – my parents would certainly consider travelling by train again now. And if the small issues around communication could be eradicated they’d love the service even more.

This shows how getting a service like this right can make commercial sense, as well as being good PR for the train company.

If the above insights have been useful to you, and you would like more views from people who can clearly describe their needs and preferences, please contact us. We provide a broad range of research and inclusion awareness services for organisations via our user panel of over 350 people who have a wide range of disabilities of varying severity or are older.